MOURNING JEWELRY FROM THE VICTORIAN ERA

The Victorian era (1919-1901) is famous for it's deeply romantic sentiment, as well as it's tales of hardship and loss. With such a high mortality rate, death was an ever present reality of each day. Women were the public face, the mascot if you will, for the whole family unit- and it fell on their shoulders to express the grief of losing a family member through her personal dress and fulfillment of other societal customs. Widows were expected to be in 'full' mourning for 2 years, and could only wear black, followed by an additional period of half mourning where they could also wear grey. This article will explore the adornment and jewelry involved in the mourning custom. These items commemorate lost love ones and celebrated the part of their physical form that does not decay: their hair.

Mourning became almost a fad, a fashion statement of the time, based on the example set by Queen Victoria who mourned for 40 years over her beloved consort Albert. People looked to the example of royalty to start trends, much like today's movie stars are muses for popular fashion. The materials used to make this jewelry were often symbolically black, and included enamel, jet, and onyx. Gold and white where also acceptable colors in this jewelry, and represent untarnished purity- represented by high karat gold and pearls (sometimes featured instead of black in the mourning jewelry for an unwed person or child). The hair used in this jewelry was often taken from the deceased as the body was prepared for burial- a process that still took place in the home, as embalming and the funeral industry as we know it we not common place.

The hair could be be cut up into tiny pieces and used as a paint pigment to create an elaborate scene, such as this grave, skull and weeping will tree. Also note the white enamel on the ring to the left, as it may connote the person was young or unwed.

While some of this jewelry is more ornate than other pieces, it was widely popular in England and America for the duration of the 19th century. The earliest examples date to the 1700s are the most macabre, featuring skeletons and the moto "Memento Mori" or "Remember we all must die".

Several things played a role in its decline in popularity- including Germ Theory, a new understanding of how disease was spread, and a change in burial customs. While many find mourning jewelry, and especially hair jewelry, to be an odd thing to wear and collect I personally adore it for its beauty and historical significance.

A late Victorian example of a hair locket ring in 18k gold with Persian Turquoise.

Premade 'Off-the-rack' mourning locket in 10k gold and black enamel. A popular item for less well to do mourners. Reads "in memory of" c.1870s 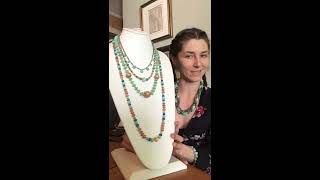